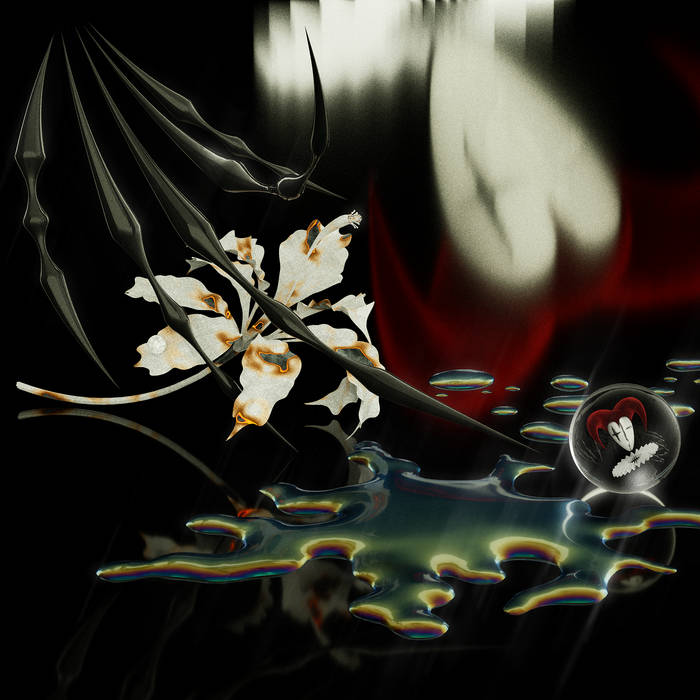 "Veering from fractured hyperpop into deconstructed club oddness and ambience, this album is a restless and rewarding experience that will delight fans of the Orange Milk catalogue and the stranger corners of Oneohtrix Point Never’s discography." (DJ Mag)

"Time and time again, we have found ourselves lost in this album. A potent stew of element we’d possible not normally enjoy tumbling in space with sections we wish continued into far longer expanses." (Obladada)

On ORGANE SOLAIRE (GEN051) by AMSELYSEN a coherent ensemble is presented consisting of digital, hyperprocessed textures, minuscule sound fragmentations and impassioned, pressing vocal broadcasts. Deceptively, the sound at intermittently even approaches something like a sugary sweet pop production: chord stabs, piano tones, heartfelt howling, energetic kicks, the whole works. The most powerful weapons in the electro-acoustic toolkit are used here: sound events occur on a microscopic scale, sliced, granulated, pitch-bent, resonant, bubbling, stretching - but at the same time have an impactful, cinematic, piercing quality. From the arrangement point of view there is a cryptic multi-centered, restless logic, with the trajectory of all tracks constantly getting out of balance, twisting, self-subverting. The human voice, or the remnants of it, form an important thread through this album; spanning a wide tonal, textural range, the voice material is sometimes vocoded, stuttering, crushed, resampled, fried, totally pushed beyond its limits; but at other times innately performative, assertive - a declaration of intent or active intervention, conveying meaning, communicating something important. Organe solaire follows 2020's murky transmission Hypnagogic Surge.

// About GEN051
/ Hakeem Lapointe (Amselysen) about the album
“My [Amselysen’s] second full length album’s focus, Organe Solaire, strays from conceptual music and goes on dissecting and splaying a dark but colourful sludge of emotions. A major point source in my compositional approach to the record has been imagining the trajectory of hyper-pop if it evolved with a more pessimistic tendency, with the same bells and whistles, but less shiny and squeaky clean — like the rainbow reflections of tar bubbles.
Organe Solaire, unable to afford being cryptic, doubles down on honest, raw lyricism and is quick to open up, building a comprehensive musical and gestural language that reflects the narratives behind each and every track. They range from slow suicidal ballads, to demented hyper-melancholic pop, to interludes containing heavy narratives, like Discrepancies (for Kellyanne): a heavily filtered piano composition dating from my late teens, also acting as a hope to reach out to a long lost then-best friend.
I did not shy away at referencing personal idols who’ve inspired me throughout the years: The Labour of Love samples Akira Fuse’s Shikuramen No Kahori, a song mentioned in Joji Koyama and Tujiko Noriko’s feature length film Kuro, and matches its theme: gazing at the afterimage of a romance long gone. Post-modern Tsunami, as outlined by “shoutout to Hito Steyerl”, is made to the image of Steyerl’s Liquidity Inc.: in its wave-like structure; in its senseless meme aesthetic; and nods at its conceptual approach, dissecting contemporary culture with economic undertones.
To aid me in my efforts, I have called upon two outstanding collaborators to lend their strengths on the album. I’ve recruited the excellent Ubu Boi, providing tactful compositions and solid vocal performances, and the mysterious 2x|n, a.k.a. Seraphim, for precise sound design and incisive aural interventions.
Delving into romantic torment, drug use, artistic frustrations, struggles with mental illness, Organe Solaire brings forth a fundamentally human experience in the form of raw edges thinly veiled under a layer of gloss.”

// BIO
/ Hakeem Lapointe (Amselysen)
Hakeem Lapointe, better known as Amselysen, is a Montreal-based artist and musician. Initially a contemporary art graduate, their approach to music carries conceptual sensibilities and questionings of cultural phenomena. Lapointe’s interest is to delve into the possibilities of genre remediation and output them as a coherent leftfield sonic object: a way of pursuing novel ideas and sounds without any possibility of mimicry. However, they do not restrict themselves to serious academic concerns and they bring out the element of play into their work with a sense of urgency. The Amselysen project isn’t too discerning of which ideology or genre it falls into either; its first and foremost ambition being to honestly celebrate the joys of sound.