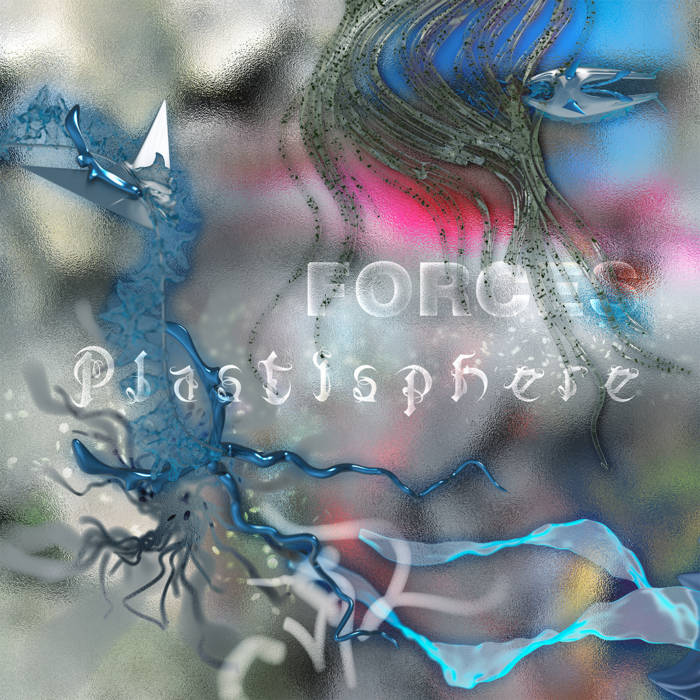 On PLASTISPHERE by FORCES, the radical treatment of its synthetic trance and EDM-aligned source material is best described as granular, microscopic or even atomic. Samples seem to pass through a fine razor and get rearranged into stuttering, stuck grooves of compound, assembled sound, into blasting kick sequences that stray far outside of the ordinary bpm spectrum, into frantic snippets of interrupted arpeggios, into metastable sound arrangements that seems just one bar away from total collapse into chaos. Far from just hectic, these provoking sounds operate in an environment of frozen grain washes, and what might have been huge euphoric trance climax chord progressions before get transformed into something closer to crunchy, shapeshifting electroplated textures, these transmutations powered by EDM-mangling supercollider code, almost like arcane plastic-gobbling bacteria.. This neatly ties into the conceptual focus of Plastisphere. The album situates itself in our current plastic ecological era, with its unprecedented hybrid ecosystems where new matter relations need to be formed with artificial detritus, where discarded xeno-materials are forced into coexisting somehow, with nominally inert but totally alien, omnipresent materials accumulating and dividing into microparticles until the always menacing collapse or revolution point.

"The Finnish producer speculates on the sound of a sea polluted by plastic, where ecstatic trance climaxes have been shattered and disarmed by granular filters and processes. An almost-chaos of white noise, which is in fact meticulously rearranged into this breathless and stuttering final product, offers wave upon wave of interruption and dispersal." (AQNB)